Black Diamond Viper Review: Best All Around Ice Tool for 2018 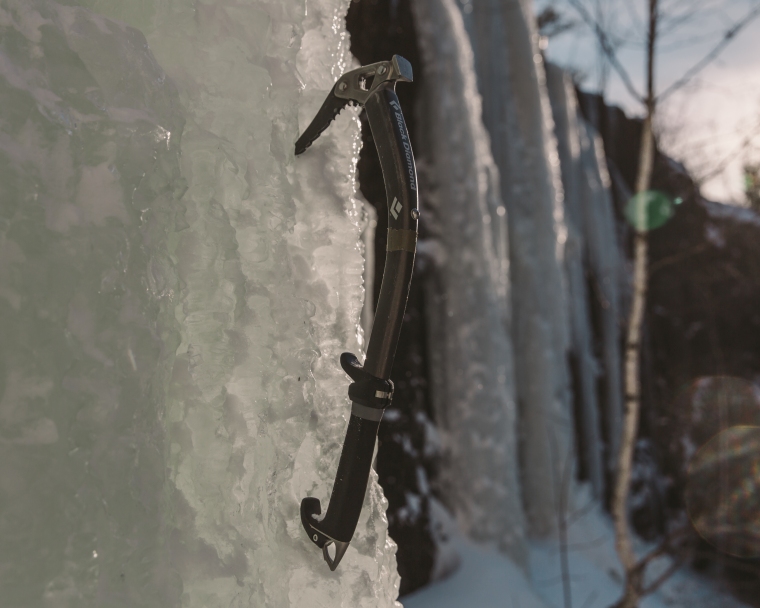 The Viper gives you the best of both worlds with little compromise. The changeable hammer and adze lend to its versatility. The hammer allows you to be able to hammer in pitons or break away ice without damaging or dulling the pick. The adze can be used to cut into hard snow to make steps as you make your approach or top out. The spike under the handle is aggressive enough to actually piece the snow and ice when used in the “cane” position, something that most technical ice tools no longer have.

The Vipers being used in the “cane” position

The Viper more than holds its own on vertical ice. The aggressive lower pommel  keeps your hand in place along with the rubberized convex grip. The upper pommel is adjustable along the shaft with Black Diamond’s “flick lock” system, making a good grip when switching hands or choking up on the tool. The weight distribution doesn’t seem as far forward as other tools, and to me that makes swinging this tool feel easier.

The Vipers on vertical ice.

The pick that comes standard on these tools are Black Diamond’s alpine pick, which are marketed as all around rock and ice tools. Black Diamond also sells picks specifically for ice, mixed climbing, and alpine travel.

At $249.95 per tool, this is one of the most inexpensive ice tools designed to climb vertical ice, putting it roughly $50 less per tool than most of its major competitors.

There are some drawbacks to the Vipers. They’re are not the best choice if you plan on doing any mixed climbing or dry tooling due to the hammer and adze. Although adze could be used as a cam in a rock crack, it it not worth the possibility of the tool pulling out of the ice suddenly or “popping” and catching the adze in your face. Tools that have a rounded head are safer options for mixed routes. It also has a short shaft compared to some other tools, making using it as a cane difficult on less steep inclines.

The combination of the changeable hammer and adze, spike, and changeable picks makes the Vipers the most versatile ice tools for outdoor ice climbing in the winter 2018 season.

One Comment on “Black Diamond Viper Review: Best All Around Ice Tool for 2018”