At Smuggler’s Notch Ice Bash 2018 we had the chance to talk to Mammut’s New England Sales Rep, Kristopher Huff, about their new Smart 2.0 belay device.

NEC: “What were the reasons for updating the Smart devices?”

KH: “The Smart has been around for almost ten years and the new version the geometry has been adjusted to make handing out rope a little bit smoother and to make lowering a little bit smoother. The original Smart was designed to slip a little bit on a fall to make a more dynamic catch. The downside of that is for lighter climbers the rope would slip a little more than people would like or when people would hang on it for a long time the rope would slowly creep. Consumers didn’t really like that so we ended up redesigning it. The geometry at the top has shortened up a bit and there’s a little bit of a barb in here. It creates a more positive lock when you catch somebody and you can feel it engage quicker. It also does not creep quite as much. The arm is a little bit shorter than the old one. That makes it easier for paying out slack, and it’s smoother for lowering. So at the end of the day the changes make the Smart 2.0 easier to handle and addresses the two main things consumers would complain about.” 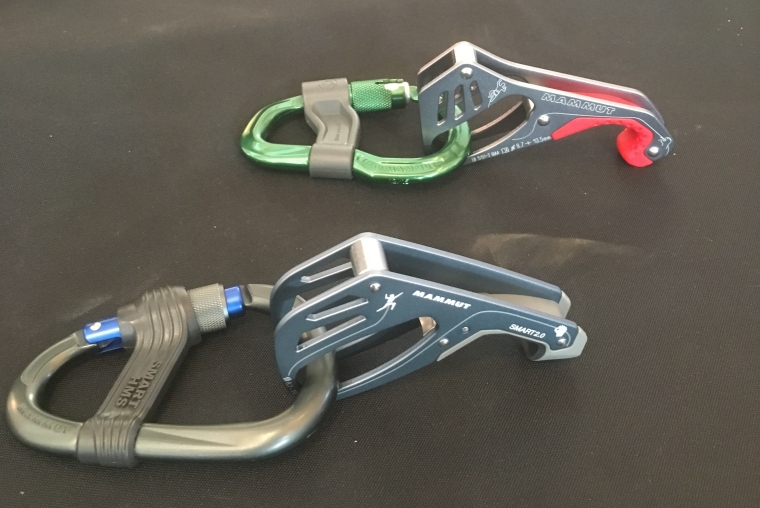 NEC: “What’s the advantage of using your carabiner?”

KH: “With the Smart devices there are no moving parts but it works on the same principle as a grigri. Instead of a cam rotating around to lock the rope off, the device itself rotates around the carabiner. You do not have to use our carabiner but we encourage folks to use one with the captive eye so it doesn’t crossload. If the device goes over the gate it won’t lock properly, so these caribeniers are designed to keep it orientated correctly. Ours has a plastic indent so you can’t open the gate with the plastic closed. For 2018 this carabiner gets a redesign. The old one was a two-stage twist lock with a piece of plastic in the gate that kept it completely locked. The new ones are a screw gate which more people are familiar with and you can’t close the safety gate until the screw gate is completely locked. It is something we also heard as feedback and adjusted.”

There is no plan to make any changes to the two rope Smart Alpine, though it seems like Mammut is listening to consumer feedback and updating their products. It will be interesting to see how people respond to these new changes to the Smart 2.0. It is now exclusively sold at REI until the full release in Spring 2018.