We continued up north to Rocky Mountain National Park. In May the trails started out muddy and became hard snow. We walked west from the Bear Lake Trailhead to Emerald Lake.

Walking Around Emerald Lake, Dragon’s Tail in the Background

At the shore of the lake we put our crampons on. We were encompassed by Hallet Peak and Flattop Mountain both rose approximately 2,000 feet above the lake. There are not many places in the north east that have snow bowls at this scale. We started our trek up snow slope up towards the Dragon’s Tail, which is a rocky feature that splits two couloirs leading to the peak of Flattop Mountain.

As we reached the base of the rock we split into two groups of two. One group would climb the right couloir, while the other group would climb Enter the Dragon, also known as The Old Route, a 5.6 or M4 route that goes up the rocky feature.

The Starting Point of Enter the Dragon

The team that continued up the couloir transitioned to short roping as the snow became steeper.

Meanwhile the team I was in started up the first pitch of Enter the Dragon. The first part of the route was an awkward movement through steep, chest high snow to get to a good belay. With the amount of snow still present we decided to keep our boots and crampons on, despite there being no solid ice on the route. The first pitch went up a vertical and awkward corner about 3/4 of a rope length and only had a couple good spots to place protection. This was a new type of climbing for me, the cold rock froze my fingertips and I was constantly questioning if the points of my crampons where going to stay planted on the rock where I put them or spontaneously let out from under me. Thankfully, I was the follower and after the first couple moves I trusted my feet more and was able to get to the top.

After the first pitch, we decided to traverse the rock and climb the coulior on the left side of the Dragon’s Tail. We also transitioned to short rope techniques as the hard snow on the slope began to soften from the sun. About 3/4 to the top of the couloir we reached a vertical rocky surface that we has to climb over so we transitioned again into a belay.

I belayed the leader up and over. When he had me on belay I took out the anchor and traversed a couple steps over to where he climbed. That is when the snow under my feet slid out and I fell into the self arrest position, sliding only a couple feet. My belay and ice axe caught me at the same time.

The View Below my Self Arrest

I had practiced it many times but this was the first time I actually fell and had to self arrest. Even with a rope, it is a scary feeling. It was the last thrill before reaching the top. 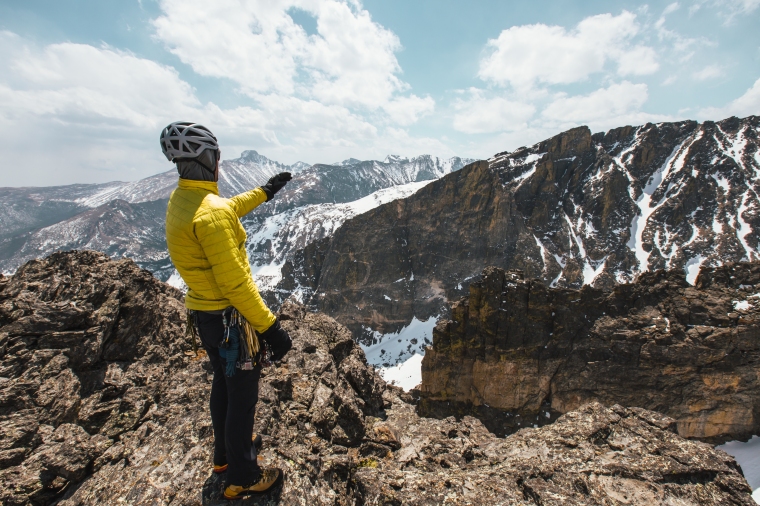 View from the top of Dragon Tail

The rugged terrain and scale of this climb is not found many places in the East. The transition from deep snow, to cold rock, back to steep snow really gave me an appreciation for the terrain in the Rockies and was a great ending to our trip in Colorado.

For our earlier climbs in Colorado, check out Part 1 and Part 2.