After climbing in southern Switzerland, we drove back through the passes to one of the most recognizable places in Switzerland, Furka Pass. This is the world famous mountain road that connects central Switzerland from east to west. One of the highlights of the drive is how close it gets to the Rhone Glacier. One of the dominating peaks close to the Rhone glacier is Galenstock, and that is the peak we set out to climb. Just east of the famous glacier there is a pull-off. From there it was an hour of uphill walking in the dark, early hours of the morning to get to the Sidelen-hutte. Once there, we tied ourselves into rope teams and started the walk up the Sidelen Glacier. The next hour was spent switchbacking up the glacier with the granite cliffs growing around us. We approached a via faratta on our right, obere bielenlücke. This climbing path took about an hour of climbing on a mix of rock and rebar.

This was the first via faratta that I had ever been on and was amazed how comfortable I could feel on such high exposure. All of a sudden I began to feel light headed. I was in the middle of the group, hundreds of feet up a cliff. My only option was to make it to the top. We got to the snow covered ridge top and I tried to compose myself. All of a sudden I was nervous, but didn’t know why. I had just made it up to solid ground and was in no danger at all, so why did I still have butterflies in my stomach? That’s when I realized that I had just quickly gained a couple hundred meters. Now sitting at 1000 meters above where I was just hours ago, my body was struggling to perform with the lack of oxygen. Luckily, my group knew what I was feeling, gave me a chance to drink some water, and determined we were able to push onward. We paired up into rope teams and traversed the snowy ridge a couple hundred meters until it became more of a vertical climb.

Traversing the Snowy Ridge to the Vertical Rock

The clouds rolled in as we started to climb, and I watched my climbing partner climb up into the cloudy abyss. 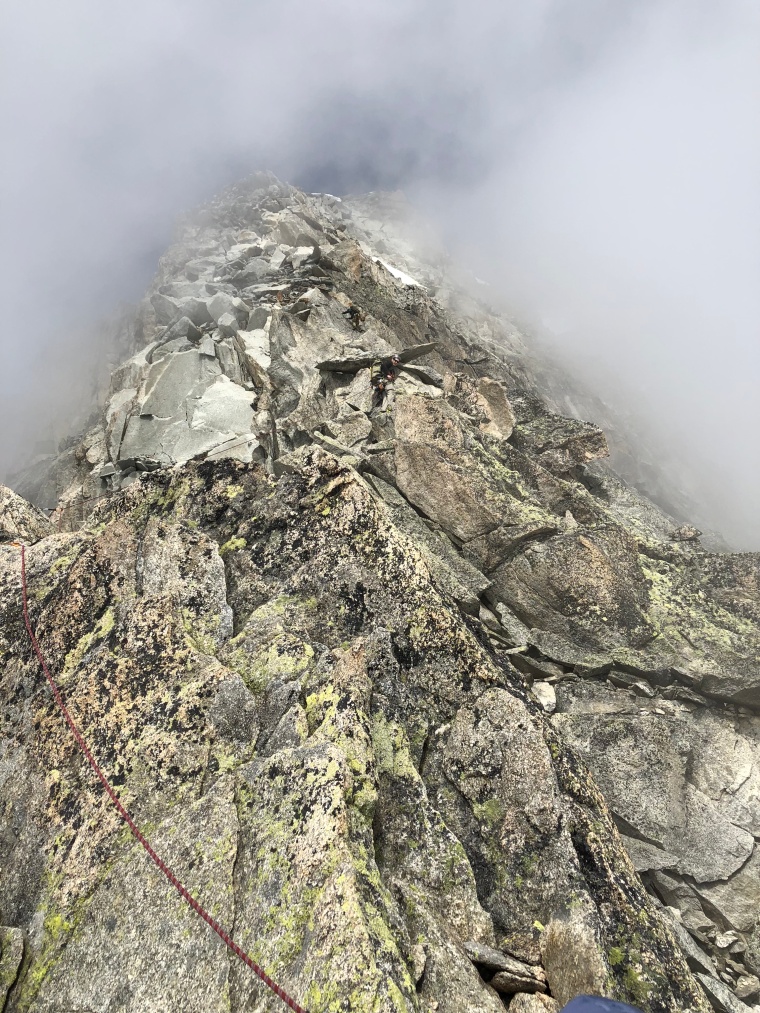 Climbing into the Clouds

We had 9 pitches to climb ranging from 5.4 to 5.9. This took 3 hours and was even more exhausting than the climbing I had done in Ticino because of the elevation. I ralized that a 5.9 at 300m elevation is not the same as a 5.9 at 3000 meters elevation with a pack full of gear.

By the time we scrambled to the snow covered top of the climb, we had another couple hundred meters of ridge walking to endure. Every step was exhausting, as if I was carrying another person on my shoulders. It felt like I was using every muscle in by body just to breath. I knew that the fatigue and anxiousness that I was feeling was natural, but in the moment it felt as if the feelings were incurable. I was taking a deep breath after every step. Finally we made it. The snow covered summit was wider than I thought it would be, based off of the narrow route we took to get there. The view was breathtaking.

In 7 hours we gained 1300 meters of elevation and 4 km of straight line distance. My fatigue and anxiousness settled for a couple minutes until we started moving again. We traveled down the snow field south west towards Galengrat. During this 800 meter walk we dropped 300 meters in elevation. I remember feeling noticeably better towards the end of this leg of our trip. We arrived at a rappel station at around 3252 m of elevation.

The Top of the Rappel, Sidelen Glacier in the Backround

This was a multi-pitch rappel station with chains and ledges to help us transition in between the 200 meters of rappelling. This dropped us onto a snowfield that splits the top of the Sidelen Glacier in two, and we glacaded back down to the Sidelen-hutte.

Although this wasn’t the highest elevation climb that I had done, it was the first time that I felt the real effects of elevation change on my body. I learned a lot about what it actually makes you think and feel, as well as how much I could still push myself and still be safe. The glacier travel, the via faratta, the climbing, rappelling, and glacading all made this a very diverse climb and gave me more respects for the Alps and those who climb them.

A couple days before this, I climbed farther south in Ticino, Switzerland. Although only an hour dive away, it seems like two different parts of the world. You can read about it in Part 1.