February of 1940 in Manchester, Vermont, four ski friends sat around a fireplace of a ski lodge. Robert Langley, Charles “Minnie” Dole, Robert Livermore, and Alex Bright had skied up and down Bromley Mountain all day and were now drinking hot rum and talking about the looming global war in Europe. Langley was from Boston and the president of the National Ski Association. Dole was from Connecticut and had just founded the National Ski Patrol System after suffering a broken ankle skiing in Stowe and had to be helped down off the mountain by a friend. Livermore and Bright had skied for Team USA in the first winter olympics in 1936. Livermore was a Harvard graduate and Bright was the leader of a ski club in Boston.

The four started started talking about the Russo-Finnish war, in which 200,000 Finnish defenders were outnumbered by 1,000,000 heavily armored and mechanized soldiers of the Russian Army. In the dead of winter, the Finnish used the terrain and weather to their advantage to hold of the superior Russian Army and cause 200,000 casualties opposite the 70,000 casualties for the Finnish. What if Hitler was able to gain a foothold in Canada and tried to fight his way down to New York City and Washington DC? He would have to get through the rugged North East and the Appalachian Mountain Range. Because of this, the four agreed that there should be a fighting force that knew the terrain of the North East and were prepared to use special tactics and equipment to protect it (much like the Green Mountain Boys of the Revolutionary War). This need for soldiers with specialized equipment and training to fight in vertical terrain and extreme cold weather led to a letter being written to the War Department that night. Despite the War Department’s disinterest, they formed the Winter Defense Committee of the National Ski Association.

In October of 1941, they received a letter back from the Secretary of War after the US analyzed the aftermath of the Greco-Italian War. Despite all the other chaos in Europe, Mussolini attempted to invade Greece through their shared mountainous neighbor of Albania. Once again, the bigger and more professional Italian Army was embarrassed by an enemy that knew how to fight in their home of cold and mountainous terrain. This letter described the formation of what would become the 10th Mountain Division based in Fort Lewis, Washington. The first soldier to volunteer for this unit was Corporal Charles McLane of Manchester, New Hampshire, a former captain of the Dartmouth ski team.

Some of the specialized WW II mountaineering gear on display.

What followed was a influx of outdoorsmen and skiers into this new unit, both American born and foreign born. The idea was that it would be easier to train a skier to be soldier, rather than the other way around. However, the draft brought in more and more soldiers untrained in skiing and climbing. This led to the establishment of the elite Mountain Training Group and the development of specialized equipment. The division would then move to Camp Hale, Colorado where they continued this specialized mountain training. 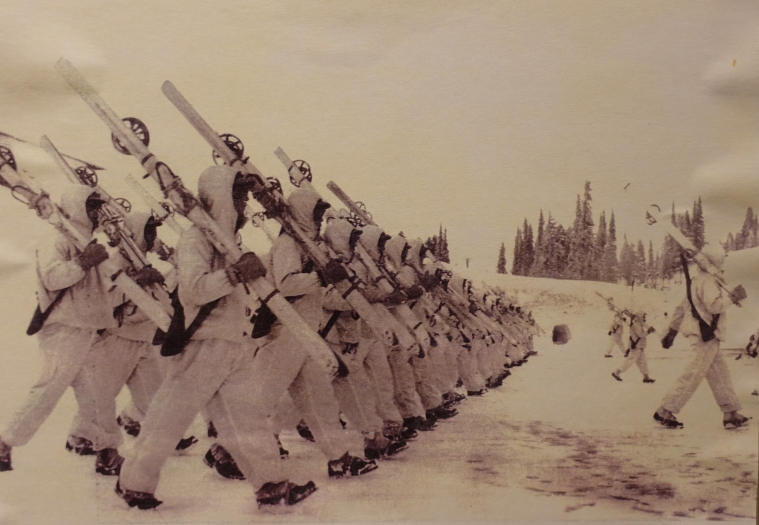 The 10th Mountain Division would go on to see combat in the Italian Alps in 1945. They used their specialized training and equipment to clear the mountainous routes through the northern passes of Italy for the rest of the Army to follow. After the war, the unit was repurposed and eventually inactivated. Alumni of the 10th would go on to become innovators themselves and open up ski mountains, encourage Americans to participate in outdoorsmanship, and even create the Nike brand.

In 1985, the 10th Mountain Division was reactivated at Fort Drum, which is situated just outside of the Appalachian Mountain Range. Present day, it is comprised of 3 Infantry Brigades, Aviation, and Artillery. One of those Infantry Brigades includes the National Guards of Maine, New Hampshire, Vermont, Massachusetts, and Connecticut. The ranks of these units are filled with soldiers who are natives and know the terrain of the North East. They prepared to use special tactics and equipment to protect it, just as the four friends envisioned while drinking hot rum around a fireplace in February of 1940.

The spirit of the Mountain Training Group is now carried on by the US Army Mountain Warfare School which uses the terrain in the North East to train soldiers across the Army how to survive and fight in the cold and vertical terrain. They also continue to test and evaluate specialized gear for mountain soldiers.

Some of the modern day equipment used by mountain soldiers on display.

The Vermont Ski and Snowboard Museum displays some of the mountaineering clothing and equipment that was tested and used by the 10 Mountain Division soldiers of World War II as well as equipment used by modern day mountain soldiers. The exhibit is open through October 2019.

Climb to Conquer by Peter Shelton