How long should a pack last? One trip? One season? Until it is worn out? Until a better pack design comes out? Can a pack be so well built and so well designed that it will never lose its function? That is what Dana Gleason dreamed of over 30 years ago when he started the company Dana Designs, which was known for their high end, semi-custom backpacks at the time. Dana eventually sold the company (and his designs) to what would become Marmot. Now the owner and operator of Mystery Ranch, Dana has started re-releasing his notorious bag designs as the licences have freed up. One of these old school packs that has been re-released is the Mystery Ranch Bomb Pack. After 30 years, surely modern designs and materials have surpassed Dana and his bomb pack, right? Does this classic design stand up to the test of time?

The most notable feature of the Bomb Pack is how solid the construction is. It is marketed as a Berry compliant military pack, so it is constructed of 500D Cordura and rugged in every sense of the word. Mystery Ranch is known for making durable packs and this is no exception. 30 year old Dana Design packs can still be seen on mountains across the US and there’s no doubt that a Bomb Pack will still be found on someone back 30 years from now. 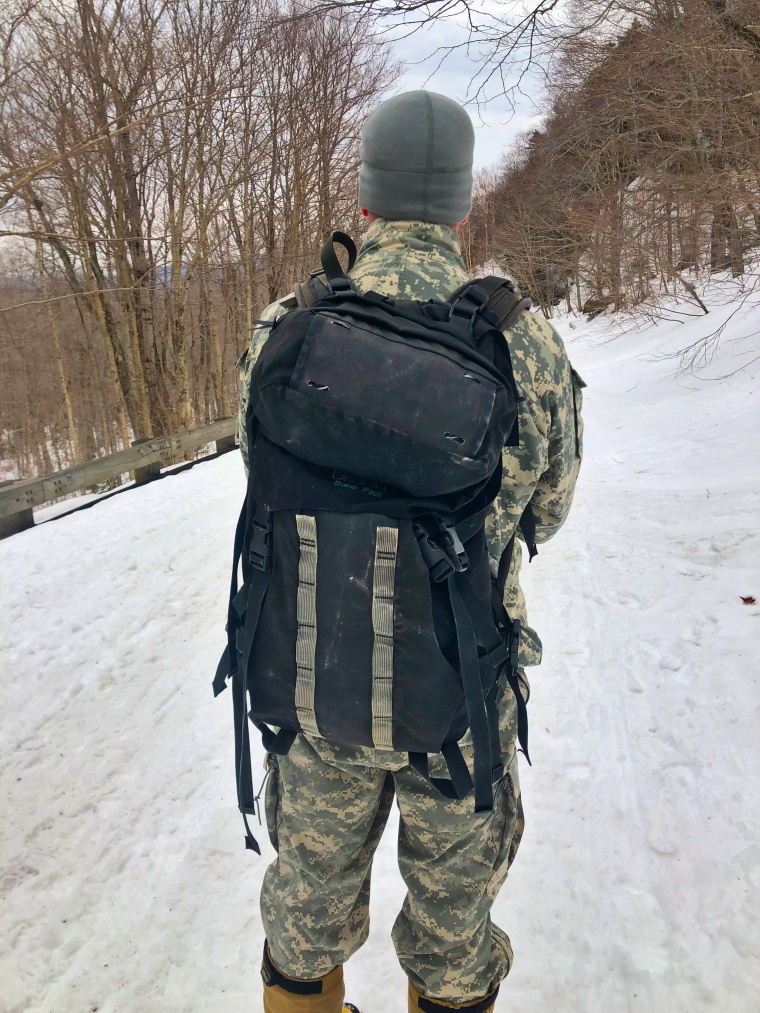 One of the original Dana Design Bomb Packs

In addition to how durable the pack is, it can also comfortably carry heavy weight. The hip belt is almost an inch thick with padding and pads the hip really well under load. The hip pad can also be removed to make it a smaller package or easier to wear with a harness. The Bomb Pack has a polyurethane sheet that can be adjusted up and down the pack to account for different torso sizes. This sheet is supplemented by two removable composite rods that vertically support the pack. These features help the bomb pack comfortably carry around 50 pounds. Not many 40 liter packs can do this.

The design itself is a classic bare bones mountaineering pack. The top lid is about 5 liters and cannot be removed. However, it can be adjusted to allow for additional height of the pack or be synched down tight to the pack for smaller loads. The pack comes with some useful features such as a hydration pouch and a hydration tube holder on the shoulder straps. All of the compression straps come with the typical mystery ranch velcro fasteners to roll up and store the excess strap. So even though the design itself is old, there are small aspects of newer Mystery Ranch packs that could be found throughout the pack.

The pack being used with the hip belt removed so it wouldn’t cover the harness.

Most of the downsides of the Bomb Pack come from its older design. Firstly, the outermost “shove-it” pocket is not as useful or versatile as other front pockets. We’ve used the pocket for helmets, crampons, and raingear. The main issue is that there is no material on the sides of the pocket so there is always the risk of whatever you are carrying falling out one of the sides. On modern packs that have a dedicated helmet holder, there is little chance of your helmet falling out because it is designed to hold a helmet. On packs that have a crampon pouch, there is little chance of you losing your crampons, because it is designed for that.

Notice the insecurity of the “shove-it” pocket and the lack of side compression straps.

The attachment options on the bomb pack are also not ideal. Along the sides of the pack there is only one buckle strap towards the bottom that could be used as a horizontal ratchet to keep things in place. Besides that, the shove-it pocket is the only other option for keeping things accessible on the outside of the pack, and because it is farthest from the wearer’s back, it is not ideal for heavy items. The ice axe and trekking pole holders work but the handles have to be awkwardly clipped in to the straps of the shove-it pocket. There is no easy way to carry a rope externally on the pack, it would have to be put into the main compartment. Adding a strap to hold the rope on the top of the main compartment but below the lid would increase the amount of gear the pack could carry by freeing up space in the main compartment.

The Bomb Pack was Mystery Ranch’s homage to years gone by. There was no change to the design, it was basically a re-release of a 30 year old pack design. Of course the old design wasn’t perfect for every application that you could throw at it like some of the more modern packs. However, it does do 3 things really well: it can hold a lot of stuff, it can comfortably carry a lot of weight, and it will last a long time. If those are the three aspects of a pack that matter to you the most, and you want a piece of nostalgia, then the Mystery Ranch Bomb Pack would be worth picking up. At the time of this article the Bomb Pack is no longer being sold by Mystery Ranch and was only sold from Fall 2018 to Summer 2019. However, Mystery Ranch told us that they may bring it back sometime down the road.